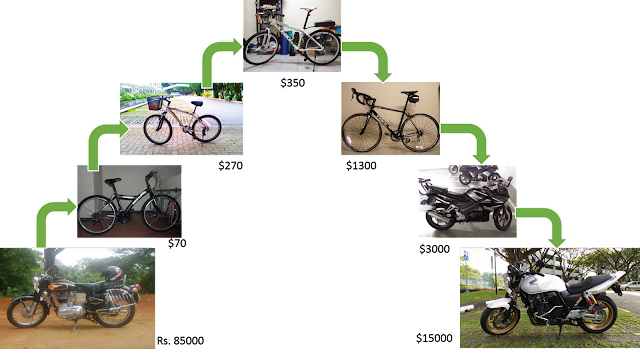 As is evident to anyone who has read this blog, I was completely a different person 10 years back. Back then, I was uncomfortable and creepy around girls. Right now, I am just creepy and that somehow makes them uncomfortable (emoji of disbelief!). Jokes aside, it took me around 23 years to talk to girls without awkward silences and extreme sweating. At 23, for every female friend I had there was an incarnation of Lord Vishnu. I had promised myself to change that and the last 8 years have given me enough time to make a lot of amazing female friends (which points to the most disturbing milestone of crossing 30 and is a topic for another day). I was so good at making female friends that I even forgot about the existence of the old me who was shy and uncomfortable in the presence of the sexier sex! You can imagine how bad it was for me when I brag about getting friend-zoned on my blog!

A friend of a friend of a friend has introduced Lakshmi a few years back and we had the type of friendship which I call the Joker relationship. We smile (a good wide grin) and node our heads whenever we see each other. We were both comfortable in this platonic relationship of wide grins and head nodes and followed it religiously for a long time.

One fine day while I was in the canteen queue weighing the health benefits of French fries against carrot juice, I noticed Lakshmi standing in front of me ordering her lunch. She was passing pleasantries and enquiring about the health of his grandmother while he took the order. I realized that this is the right time to take our friendship to the next level by actually talking to her. Among all the things in the world I decided to say “Chaalu girl, being nice to the canteen guy so that he will get your order right”. The voices in my head were screaming at me to stop but my vocal cord didn’t bother. With stunned disbelief she said, “What?!”

That What was my last olive branch and I should have taken it by saying something like, “No, I was just kidding. Have a good day”. But a little voice from the corner of my head said “Maybe she didn’t really hear what you said or probably she really liked what you said and wants to hear it again. Whatever be the case, you should stand by your words”. Ditching all the angel voices in my head I gave preference to that bleak voice and repeated, “I was saying, Chaalu girl, being nice to the canteen guy so that he will get your order right”. While uttering those words I could slowly see the source of that little voice and it was none other than the past me grinning at me slowly putting on the sunglasses and saying “I am back”.

I have never talked to her. And we now have what I call a Batman relationship – Fictional!

PS: Chaalu: When someone try to get something using smart but wrong tactics, he/she is called “chaalu” (someone from the internet)

I am back! This time it is completely different from the hundred other times I have restarted blogging. I am not even sure if I will blog for another 6 months or not. I have lost complete hope in my capability to maintain a blog. :/

A funny story from my life, some idiotic theories (“scientific”) that I have. my life update and bragging about the marathons I did, are some of the ideas I have for the blog today. After careful consideration I came to the conclusion that the bragging is the easiest.

A major change in my life, in that last 1 year, is that I am participating in quite a few endurance challenges. The ultimate aim of it is to do an Ironman race one day. Following are the events that I participated recently.

Back in 2007, before joining my first job I wrote this,

Last month, I saw this on PhD Comics.. 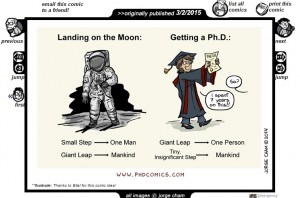 I should say that I had that “Aha! I came with that joke first” moment.. It feels good, especially when it is PhD Comics on the other end.

Long post short, I just completed my Ph.D oral examination. Mankind is a small step ahead (I hope!).

Two months back my friend invited me for a rock climbing session in his gym and to be frank I was reluctant to go. To my surprise it was the best sport experience I ever had and I immediately fell in love with this awesome sport.

I took the level-l climbing certification the next week and have been climbing regularly for the last two months.  The best part of climbing is that the only thought you have is about getting on to the next hold – meditative I would say.  The following video was taken during one of my first climbs. I am bouldering in this video. You can expect more adventurous and exciting videos soon.

So much to do and so little will!

Couple of months ago, I registered for NTU bike rally 2014. I registered 12 weeks before the rally and trained for the first 7 weeks. The best distance I covered was 50 km and then my cycling partner went for a trip. I stopped training and was a bit worried if I could complete the rally, but I did. The rally had 138 km and 188 km options and I took 138 km for obvious reasons. I covered the distance in around 9.5 hours.

The volunteers were really helpful directing us at all the turns with a pleasant smile. Every checkpoint had bananas, buns, lots of water and isotonic drinks. Cycling was fine for the first 90 kms, and then the pain started surfacing. I took a 45 minute break at the last checkpoint to recharge myself for the last 35 kms.

It was a fun day. There were a lot of amateur cyclists, like me, trying hard to finish the 138 km mark, encouraging and cheering for each other. 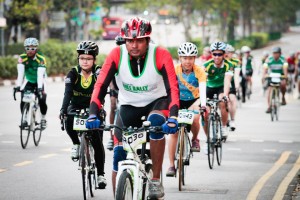 My third cycle in Singapore. My previous cycle has served me well – for 2.5 years. Now, this is going to be my new companion. A good buy, I think, considering the upcoming rally. 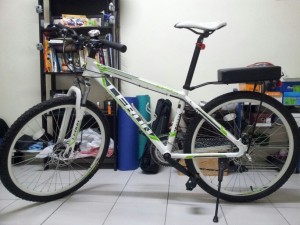 My friend shared a link in facebook, which is a proof to the statement that the summation of natural numbers is -1/12. http://www.youtube.com/watch?v=w-I6XTVZXww is the link explaining the proof. It is weird and counter intuitive. For those who does not want to spent 8 minutes watching the video, the proof is the following. If you have watched the video you can skip the proof (I have made a slight modification in summing up Grandi’s series, though.)

This is madness.. More such tweaks and you will end up showing 1 = 2.  A silly attempt in that direction is the next derivation.

It has been a long time since I blogged. I used to love blogging. There were tons of things happening/happened in my life which I wanted to share eagerly with the world. Then something went wrong! I felt too lazy to write. Anyways, among other resolutions for 2014, I decided to write more frequently.

I have no particular topic in my head for this blog. I opened my dashboard and started writing. The second half of 2012 was crazy. I was drinking every week or atleast once every fortnight. This may sound normal to some, but I was someone who used to drink once in three months before. This is one of the problems of socializing. Most friends call up, to meet in a pub or a bar. Anyways, I hate to be an alcoholic so I decided to cut down in 2013.  I kept that resolution. I had around 5-7 sessions of drinking this year and most of those were just a peg or two.

2014 is going to be a great year. I have already signed up for two challenges. I am doing a 100 km treadmill challenge in the gym, which is to complete 100 km in 3 months. To level the playing field, one can only jog 3 kms a day. I am doing quite well. One month into the challenge and I stand second in the list with 57 kms.

A biking rally of 138 km is the second challenge. NTU sports club is organizing this event on March. I signed up for it during a panicky sleepless night!

PS: The title is the first move I make while playing chess. I am most comfortable starting the game with e4!